By Brenna Goth for the Arizona Sonora News Service 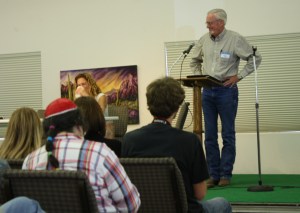 John Fife, the founder of the Sanctuary Movement in Tucson, introduces Alexia Salvatierra at The Struggle Continues conference on Nov. 30. (Photo by: Brenna Goth)

The 2-day event, called “The Struggle Continues,” was hosted by Southside Presbyterian Church, BorderLinks and Samaritans on Nov. 30 and Dec. 1. More than 100 people gathered at Most Holy Trinity Parish to hear local and national speakers as well as participate in breakout “strategy” sessions.

Several local groups and movements have important anniversaries in 2012. The Sanctuary Movement, during which churches provided refuge to Central Americans fleeing wars, is marking 30 years from the day Southside Presbyterian Church was the first to declare itself a sanctuary in 1982.

BorderLinks grew out of the movement 25 years ago to provide workshops and other social justice programs in the community. Ten years ago, volunteers formed Samaritans and began patrolling the desert to provide aid to migrants in distress.

The theme of the conference was celebrating these efforts while determining how to continue fighting for human rights on the border.

Read the full story on the Arizona Sonora News Service.