By Murphy Woodhouse for the Tucson Weekly 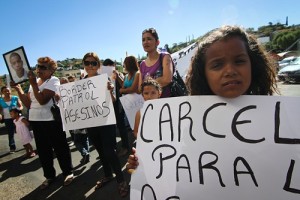 From left to right: Taide Elena, Araceli Rodriguez, Selma Barrón and Andrea Paula Elena Rodriguez, Jose Antonio’s younger sister, protest in front of the U.S./Mexico port of entry Saturday morning. About 30 family members, friends and supporters of Jose Antonio attended the protest, which started at Plaza de Hildalgo and continued to the port of entry and then to the site where Elena Rordriguez was shot. Credit: Josh Morgan

Chanting demands for justice and a thorough investigation, roughly 30 friends, relatives and supporters of the slain 16-year-old Nogales, Sonora, resident José Antonio Elena Rodriguez marched to the Sonoran side of the downtown port-of-entry Saturday morning.

José Antonio was killed the evening of Oct. 10 in a Border Patrol shooting that is still under investigation on both sides of the border.

The march ended a few blocks west, at the site of José Antonio’s death, near the corner of Internacional and Ingenieros. Standing just feet away from that corner, anger comes easily to Araceli Rodriguez, the young man’s mother.

“They’ve taken a piece of my heart. It’s where they buried him,” she said. “No one is going to return my son to me. No one can give me back the hugs I gave him, the kisses, his voice or his smile.”

Read the rest of the story at the Tucson Weekly.