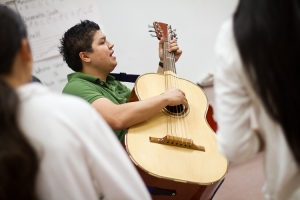 Rafael Moran plays the guitarron with his students at Wakefield Middle School in Tucson, Arizona. (Photo by Josh Morgan)

Rafael Morán didn’t originally envision his life immersed in mariachi. But it is this art form that has given him his career, his favorite hobby, and a second family.

As a mariachi teacher at Wakefield Middle School for six years, Morán, 25, infuses tradition, heritage and culture into his classes while using music as a “motivation to keep the spirit alive,” he says.

He doesn’t view teaching as his job—instead he sees it as his passion, something he loves and does 24/7.
And he doesn’t exaggerate when he says 24/7. In addition to teaching 16 classes at Wakefield, Morán also directs two youth groups, Mariachi Nueva Melodia and Mariachi Inspiración, in the evenings with his wife, Jasmin Fimbres. He is also part of the professional mariachi group, Mariachi Sol Azteca, for which he performs almost every weekend.

“I think that’s what sets me apart from the other teachers,” he says. “What I do on the weekends is the same as what I do Monday through Friday.”

Born in California but raised in Tucson, Morán had always been about sports: basketball, baseball and football. It wasn’t until he attended Tucson Magnet High School that mariachi entered his life. Morán first chose to take a jazz dance class because he heard it was easy. But when the syllabus clearly stated black spandex pants as part of the class dress code, he immediately switched to mariachi.

“You weren’t going to catch me in spandex pants,” Morán says with a small laugh.
Read more at El Independiente

This entry was posted by Border Journalism Network.